Full Circle with the Body and Blood of Christ 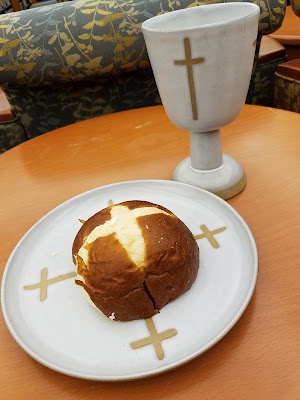 Mike and I volunteered to serve communion on World Communion Sunday, October 1. We were assigned to the right balcony on the east side of the sanctuary.

We normally sit on the main level, so being placed "above" gave us a new perspective on worship. After the sermon, we left our pew and went to a small table in the hallway where we found a chalice filled with grape juice and a loaf of bread wrapped with a burgundy towel.

After the communion liturgy, the congregation began to make their way to where we were standing.

"The body of Christ broken for you," I said, handing a small piece of bread to each person.

"The blood of Christ shed for you," Mike said as each person dipped his or her piece of bread in the juice.

The last three people to take communion were people we knew from the last church Mike pastored: John, and his son, Sam, and Sam's wife.

A Thought from the Past

As we were driving home after the service, Mike commented, "The last time I gave communion to John, he was one of he people making life difficult at the church. What a difference twenty-one years makes."

In 1997, after Mike had been at Fishers UMC for a year, a lesbian couple became members. Many people were uncomfortable having these two women and their son as part of the congregation. John and his wife, were among the most vocal in protest. Eventually over forty families left the church, including John and his family. Those days brought great difficulty to Mike as he dealt with the conflict.

Just a few months ago, Mike ran into John at Starbucks. They caught up on what happened in John's life over the years, including the death of his wife.  As they talked, John apologized for his actions and words many years ago, offering Mike a sense that this difficult situation was finally resolved.

John came full circle with Mike over a chalice of grape juice and a loaf of bread. In the brokenness of the body of Christ, there is love, understanding and acceptance.

The body of Christ, broken for you... for us.

The blood of Christ, shed for you....for all of us.

1. Is there someone in your life with whom you've had a conflict or disagreement?
2. Have you resolved or made an effort to talk about the difficulty and come to a place of reconciliation?
3 Ask God for clarity as you remember and consider a new way of being with the individual.

Prayer: Thank you, God, for the way healing comes in our children. Grant us wisdom and vision to "mend our fences" so we can offer peace and acceptance to all. Amen.