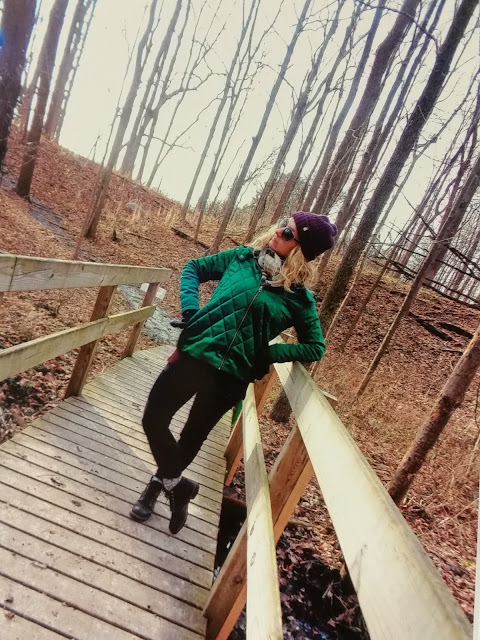 We went to the woods
That day in late December,
Unseasonably warm at 44 degrees
To find fresh air and
Walk a trail.

Leaves formed a brown quilt
With many hues
Of nature’s earthy color,
To cushion our steps
As we walked along
The rugged muddy trail.

Trees stripped of leaves
Stood like pegs set in a Styrofoam base,
The full internal pattern
Of branches, like trails,
Showing extensions
Of the tiniest stretch.

Kelly green and navy jackets
And a magenta stocking hat,
Offer contrast to the
Winter sticks of
Gray and brown.

A few days later
I returned
To the woods
Where we found fresh air,
A trail,
Laughter and discovery.
I tried to capture
The moments we shared –
But it wasn’t the same
Because you
Weren’t there.

I’ll return, though,
Again
And again
Because we were there
Together.
You left a memory
On the trail and
In the woods
I can recall
To soothe my heart
While you are gone.
I look forward
To the next walk
In the woods.
I will return
And I will find you there
As I walk among

Letters - Annabel and A Former President 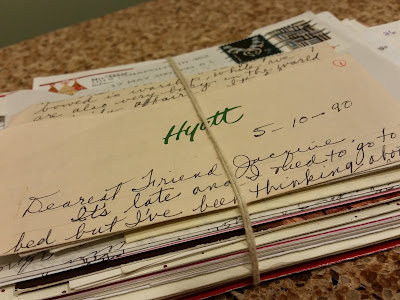 When my 101-year-old long-time friend Annabel died in late December 2016, she left me a stack of correspondence that spanned thirty-three years. Annabel valued the permanency of the written word in many ways.

For example, Annabel and her husband, Grover, kept a guest book on their coffee table in the living room. Before family or visitors left, they were invited to sign and date their presence. Even little children who could barely write their names were included. The Hartmans valued all people who entered their home.

Exchanging letters was a way Annabel and I liked to communicate. In the short talk I gave at her memorial service on January 28, I recalled how even when we lived in the same town and the two of us could talk on the phone or visit, we still exchanged letters. Writing to each other was one of the foundations of our friendship, one that offered me an opportunity to preserve the wisdom, encouragement, and perceptions on life that Annabel gave.

A few presidents read and responded to letters from constituents as a regular practice, including Barack Obama, who read ten letters a day from the multitude of mail that reaches the White House every day. Staffers carefully chose the letters that the former president read and responded to each night after dinner.

Obama describes the value of letters in an interview from the Sunday magazine section of The New York Times on January 22, 2017: “Constituents feel like you are hearing them, and that you are responding to them – that makes up for a lot of stuff. That kind of instilled in me the sense of – the power of mail. And people knowing that if they took the time to write something that the person who represented them was actually paying attention.”

“[T]he letters gave me permission to legitimately slow down, an opportunity for nuance and contradiction. I didn’t understand how meaningful it would end up being to me.”

“By the time I got to the White House and somebody informed me that we were going to get 40,000 or-whatever-it-was pieces of mail a day, I was trying to figure out how do I in some way duplicate that experience I had during the campaign. And I think this was the idea that struck me as realistic. Reading ten letters a day – I could do that.”


Barack Obama concluded, “I tell you, one of the things I’m proud of about having been in this office is that I don’t feel like I’ve lost myself.” He said, “I feel as if – even if my skin is thicker from you know, public criticism, and I’m wiser about the workings of government, I haven’t become …cynical, and I haven’t become callused. And I would like to think that these letters have something to do with that.”

Even the former president valued the communication he received from the American people represented in the ten letters he read each day.

I miss Annabel so much and can’t believe she is gone, even after living 101 years. I thought she would live forever.

At the memorial service, I showed those gathered my stack of letters bound by a tan string. “Here is a stack of many letters I received from Annabel. They are pieces of her that I can access whenever I want a ‘visit’ or need to ‘hear’ her voice again.” 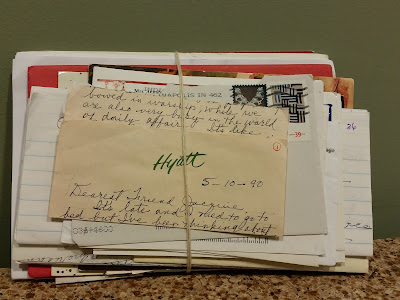 A few days later, I randomly chose a card to read, dated November 5, 2009. She signed the card, “Abiding love, Annabel.” Looking up the definition of abide, I found: to remain, continue, stay. Although Annabel isn’t here anymore her love for me abides always.

Is there someone to whom you would like to write a letter, perhaps offering encouragement, sharing thoughts or recounting what is happening in your life? Take some time to get a piece of paper, a pen and envelope, and offer your recipient a treasure of communication.

Have you received letters in the past that have particular value? How do you cherish the person who wrote?

Prayer: Thank you, God, for ways we record our sentiments and thoughts on paper. This lost art of communication has permanence allowing us to read and re-read what has been expressed. Allow us to make room and time to record our thoughts and offer pieces of ourselves that others can refer to forever. Amen.
No comments:

The Power of Tiny Things 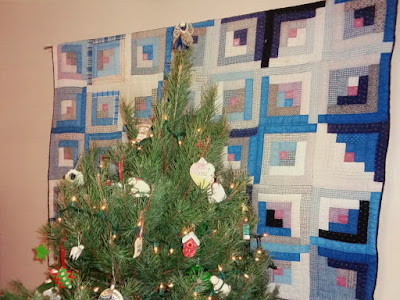 A quilt over one hundred years old hangs on our family room wall, pieced and quilted by a group of women who met weekly to sew at Center United Methodist Church on the south side of Indianapolis.

We lived in the parsonage next door to the church for six years from 1983 to 1989. Sarah was five years old and Anna was born a year later.

The sewing ladies met in an old farmhouse one quarter of a mile from the church every Wednesday from 10:30 am to 2:30 pm. Those who attended packed a lunch and took a break close to noon to eat.

A couple of times a month Anna and I walked through the cornfields between the parsonage and the farmhouse and visited the women. We admired their handwork.

Anna and I enjoyed watching the ladies make quilt after quilt, marveling at the speed and efficiency of their hands. Toddler Anna delighted in the attention these "grandmas" gave her as they stitched and talked to her with love and warmth. They even let Anna explore the space under the quilting frame that was like a little cave with the quilt-top forming the "roof."

One year a friend of one of the women gave the group a stack of ten quilt tops made by her recently deceased mother. The sewing ladies decided to quilt each top. A few were used in the annual church auction while others were purchased by people in the church.

When Anna and I were visiting a few weeks later, the ladies announced that they were giving the almost-finished quilt in the frame to me!

I was astonished! We weren't moving, which is often the occasion for special gifts. They wanted me to have the quilt as an expression of their love for me, Anna, Sarah and Mike.

The quilt has hung on the wall of every parsonage or home ever since, occupying a place of honor and pieced remembrance from the hearts of loving women.

Recently, I was looking at the quilt thinking how it has been the backdrop for many Christmas trees and pictures of Sarah and Anna. I marveled at the hundreds of tiny stitches holding the quilt together.
There is power in each stitch, for if one or two come out or break, the quilt will pucker, hang unevenly, and its beauty will be compromised.

I reflected on the power of other tiny things - how an inch-sized postage stamp can carry the range of sentiments from one person to another. How the small cap on my tire holds the air and maintains pressure so I can drive my car. The tip of my pen enables me to record my thoughts on paper.

Jesus, too, speaks of the power of small items to explain the kingdom using a mustard seed, yeast, salt and a pearl. Yeast shows how faith will grow and expand (Matthew 13:31-33). The value of life in the kingdom is more valuable than hidden treasure or a pearl (Matthew 12:44-45). Salt reflects how Christians shine for God by brining out the best in others (Matthew 5:13-14).

Look around as you go about your day. What tiny objects do you find? What is the value of these small items? I can think about the importance of sugar crystals or drops of cream that flavor many cups of coffee each morning.

Every single day I enjoy the quilt given with so much love by the women at Center Church. I notice the importance of each stitch that holds the layers of fabric and batting together reminding me that tiny beginnings described by Jesus are the nature of faith.

Prayer: God, so many times in our lives we are consumed with big things - big house, big cars, big vacations. Help us step aside, alter our vision and bring us to an awareness of "tiny things" that can grow and deepen our faith, and trust in you. Amen. 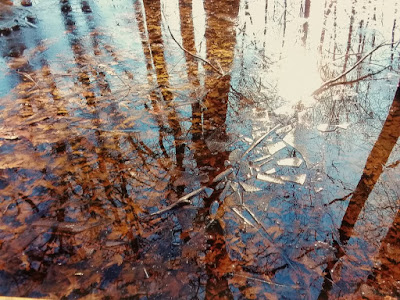 On the surface of the creek  -

In chilly water on a


The swamp is part of Ritchey Woods, a forest at the edge of Fishers, Indiana. A great place to explore in the winter and warmer weather.
1 comment: