Lament for a Fallen Bird 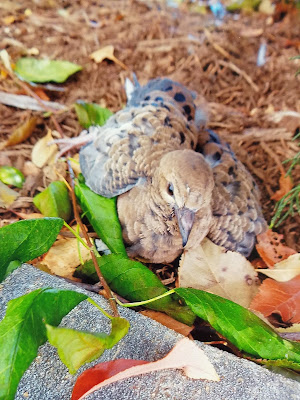 I peeked into the red-berry-laden bush outside Target recently and was startled to see a bird sitting on a nest.

Back in June, a white egg on the sidewalk in front of the bush clued me that a bird might be close by. (Read August 7, 2017, "Gather the Pieces," The White Egg on the Sidewalk.) I poked my head into the bush and saw a bird on a nest settled in the Y-form of a few branches. I did not see babies even though I checked every time I walked by. One day, I noted that the bird was gone. I assumed she left for home.

Now, three months later, I was astonished to find the bird again, sitting on a loosely constructed nest, her belly getting fuller with each visit I made.

I stopped and talked to her one day, asking if she was pregnant, but she just looked at me with large, black eyes outlined by aqua feathers. My visits to Target now included a stop by the bush to check on the bird's progress. I learned she was a mourning dove. One day I noted how the bird's body filled the nest to the edges of the branches.

A few days later, I looked in the bush and saw two pairs of bright, black eyes staring at me from their loft above the ground. The two babies looked healthy, with their black and gray feathers fluffed out, making them look almost as big as their mother.

I continued monitoring their progress with each trip to Target. The babies along with their mother were a cozy trio in the Y of the tree.

On my birthday in mid-September, once again I ventured to Target for a few items. Looking forward to seeing the progress of the bird family, I walked by the bush. The nest was empty and one of the babies was on the mulched ground, scooting along dragging its legs behind.

"Oh, my!" I thought. "The mother is gone, and the baby has fallen out of the nest and appears injured."

I started to cry, wondering how a mother could abandon a hurt baby. On my way into the store, I thought of ways I could help the bird - take it to the vet or leave it alone, hoping the mother might return.

My thoughts were on this poor bird as I went from aisle to aisle until I finished and bagged my groceries. Leaving the store, I was still perplexed how to help, but I finally decided the best thing to do was leave it in its habitat and hope the mother would come back.

The next day, I was determined to check on the bird despite a busy day. Getting out of my car I was apprehensive what I might find - Did a racoon eat the bird during the night? Did the bird die overnight from possible internal injuries? Or maybe the bird gained strength and flew away?

I reached the bush and looked all around. The bird was gone. I saw no feathers or other signs of struggle. I looked up to the nest and it was still empty. My best hunch was that someone came along and took the bird home or to a vet.

Most shoppers were probably too busy to notice a bird family They likely focused on what they needed at Target, then continued with their errands and agenda for the day.

We know God created all things, animals, trees, flowers, and humans. I regarded that first encounter with the bird as communion with another part of God's creation. The subsequent story of the abandoned bird touched my heart in such a way that I wrote a lament (a piece of writing that expresses sorrow) to capture my feelings from the bird's perspective.

A Lament for A Fallen Bird

I fell to the ground
From a nest high in a red-berry-laden bush.
My sibling and I were chubby and strong
Filling the nest along with our mother
To overflowing.

When our mobility increased
We wiggled and squirmed
Vying for the limited amount of room
In the Y of the tree branches.

Over I went one day,
Landing on a bed of mulch and dried leaves
Surrounding the bush.
My legs broke and dragged behind me
When I tried to scoot along using my belly and wings.

My heart broke in the fall, for I knew no one
Would look down, see my dilemma and offer help.

The nature of my species is to abandon those not
Perfect.
So here I rest, unable to fly
I look up at the abandoned nest
Realizing I am abandoned too,
To live with broken legs and a strong body,
Scooting along, hoping to make a life
For myself with limited mobility.

The family takes off without me
And I am left behind
With God near.

1. Have you experienced nature in a way that has touched your soul and led to a new insight or perspective about life?

Prayer: God, thank you for the encounter with this bird family that in some ways reminds me of the story of my own family of origin. We can see parallels of our lives with what happens in nature. For God's presence in the bird and in me that brought about oneness for a moment in time, I am grateful. Amen.