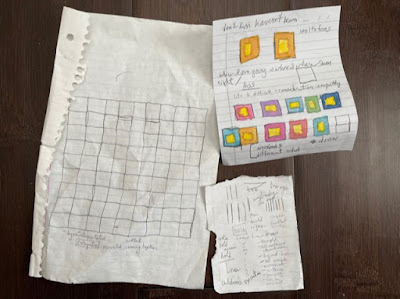 “Mommy, mommy, I need more paper. The box is empty. I want to draw my idea,” my daughter, Sarah, said.

I turned around from the kitchen counter where I was making biscuits for dinner to see my three-year-old with an empty box usually filled with drawing paper.

“Oh, Sarah, my hands are sticky. Look at the dough hanging on my fingers. Hold on to your thought. I will be done quickly.”

I finished kneading the dough, cut the biscuits, and put the baking sheet in the warm oven.

Taking the empty box, I went to the closet where we kept the paper.

“What are you going to draw?”

“I have an idea, but I want you to be surprised,” she said taking the paper overflowing from the box to the table where her imagination came alive. She was happiest with a blank sheet of paper, markers, crayons, scissors, and tape.

Her sister, Anna, who was born a few years later had the same interests. She, too, thrived, with paper and art supplies.

Back in the late seventies and eighties when I had my daughters, there were not many books about nurturing creativity in preschoolers . But I did read an article one day in the newspaper offering a few thoughts on art for young children.

The article said to encourage a child’s creativity, parents should give the child sheets of paper, not coloring books. The article continued, “A blank sheet of paper offers possibility and freedom to the young child. When commenting about your child’s artwork, remember to say, ‘Tell me about your picture,’ rather than naming or describing what you think your child made. Having the child tell about his or her work, gives him or her an opportunity to use descriptive language to accurately name what you see on paper.”

These comments helped me as I wanted to respond to their artwork in a way that was encouraging and helpful.

I often brought a bag of paper and crayons with  us to church, in the car on trips, and to keep the girls occupied during my hair appointments. I was grateful for my daughters’ endless ideas and imaginative thoughts.

“Tell me about your picture, Anna. I see lots of blue and red,” I asked one day watching Anna so busy at the table.

“I am drawing Dorothy and Toto, my favorite characters in the Wizard of Oz.”

“You do like Dorothy and Toto. I see Dorothy’s red shoes. Click, click and off she goes back home to Kansas,” I said, Anna laughing while I described her favorite scene.

Watching Sarah and Anna paint, draw, and cut paper brought delight to my heart. I could tell by their interest and the amount of time they spent at the little table, I was nurturing and encouraging a talent each possessed of creative expression on paper.

Art became one of their favorite classes when the children started school. Sarah eventually became an art teacher. Anna has used her creativity professionally as a marketing and media director at small businesses.

While I cherished the pictures Sarah and Anna made growing up, I never considered I would be interested in art as well. I did not like art in junior high. I do remember the sides of my notebook paper were always covered with lines, though. Some of the lines I made into boxes stacked from top to bottom. Junior high was a rough time for me, and without being aware, drawing lines somehow brought me comfort and relief from anxiety and tension. 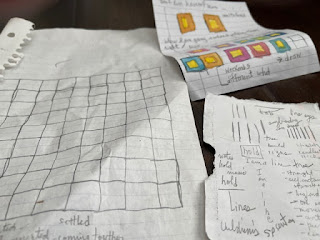 I earned a C in an introductory art class in college, but even so, art would eventually come to me later in life, and in an unusual way.

One day when I walked into my counselor’s office, I noticed an easel with a large tablet of drawing paper. She had told me a few weeks earlier that she wanted to add art to our work, but finding the large easel in the office that day was a big surprise. I looked at the blank tablet and remembered the hundreds of sheets of paper stored in closets in various parsonages in which my husband, daughters, and I lived. I recalled the joy I experienced watching my children create.

Now I was facing a blank sheet of paper, too. I had no idea what to draw. I had no creative thoughts. I felt as blank as the page.

My counselor handed me a set of chalk pastels. When I pulled the teal pastel from the box, the dust scattered over my hand before I even used it. I didn’t know if I would like something that was so messy, but I was willing to try.

“What do you want to draw?” Susan, my counselor asked.

“I don’t know,” I replied. I was anxious being put on the spot to make something. Here I was in a counselor’s office working through a difficult past. I was not inspired to draw radiant suns or bright stars or houses or cars or animals or people or the many other imaginative items I saw my children make.

“Why don’t you draw some lines.” Susan suggested. That seemed easy enough. I drew a few simple lines using the teal pastel. Then I reached into the box and pulled out an orange pastel, dragging it from the top to the bottom of the page, creating  more vertical lines. In time, I used a green, then a blue pastel to add lines to span the width of the page. The lines were evenly spaced, the same length. I did nothing else but draw rows and rows of lines that first day.

With each row of lines, I felt my heart soften. There was something about drawing a single line that set me at ease. I began to feel more open and relaxed. I still didn’t have any ideas of what else to draw, but making lines was calming.

Susan, witnessing my entry into art, made few comments, but responded “yes” when I noted how the lines were grouped in evenly spaced rows. I didn’t plan the placing of the lines over the paper, but my hand had instinctively gone that way.

Before I left my session, Susan asked me to name and date the picture. I labeled it, “Acceptance of Lines.”

Reflecting later on the use of pastels, the large sheet of empty paper and the name I gave the picture, I think I should have re-named the picture, “The Acceptance of Paper.” The paper was patient, ready to accept whatever I decided to put on – whether it was lines, an angry face, a beautiful flower, or scribbles. The paper received and held the color and pattern I put on it using the chalk pastels.

My experience with people told me that they weren’t as gracious as the paper. Many times we have experiences where we don’t feel accepted by someone, or free to be who we are and express what we are thinking.

The openness the paper provided was a starting place for me to build connections when human connections were painful. Working with the paper each session help me reach outside myself, hesitantly, at first, but gradually with more confidence and anticipation. The rows of evenly spaced lines, reflected my need for order as well. Working through trauma memories plunged me back into the chaotic home situation in which I grew up. My internal need for order while working through those moments, instinctively led me to drawing lines. I drew what I needed emotionally even though I wasn’t aware of what I needed. The paper was a place where I could grow and build experience to carry over into my dealings with people.

The order I felt from drawing lines helped me stay centered and present in my current life and relationships instead of being stuck in my difficult past. Through paper, color, and shapes, I became more attuned to myself and able to reach deeper into who God had designed me to be.

I always keep a piece of paper wherever I am...in my purse, in the front seat of the car, at my desk, or on my nightstand. Paper is always close by, ready to receive whatever lines or dots I need to help clear my head, release anxiety, and find order and containment.

Do you ever doodle on blank paper as a way to relax?