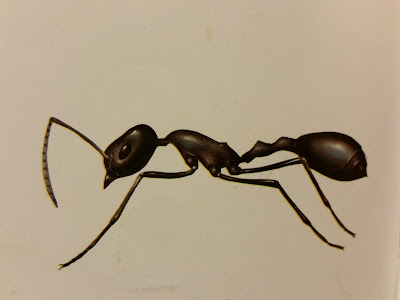 Near the curb, sitting on the ground,

I felt something on my left thigh.

Reaching down to brush it away,

I saw a large, black ant

Land on the brick

Next to my left foot.

The ant crossed brick after brick

Occasionally dipping off the surface

Falling into the gravel pressed between each brick

To form the road.


I wondered how the ant could

But the large, black ant safely made it

Up the curb onto another grassy area.

Feel something of their leg,

Brush it away and start the ant

On another busy path.


(I wrote "Disturbance" while I was sitting on a curb, waiting to listen to a lecture during our week in Chautauqua, New York. I was impressed by the ant's determination to cross the street despite people walking.)