Hasten - What Elie Wiesel Taught Me About Prayer 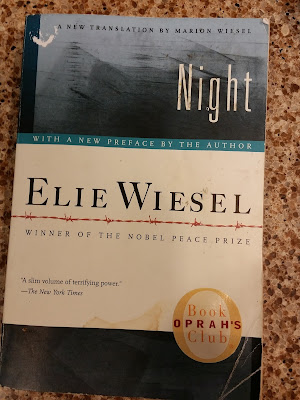 Well-known Holocaust survivor, Elie Wiesel, died July 1. He was a prolific writer with thirty books to his credit. His first book, Night, chronicles his experiences after his family was captured by the Nazis and sent to Auschwitz concentration camp.

I found a copy of Night for a dollar at an antique store one day when I was looking for a hard-back copy of an old book for an art project.

Night is a description of Elie Wiesel's time in two concentration camps, Auschwitz (May 1944 to January 1945) and Buchenwald (January 1945 to April 1945). Stories of beatings, lack of food, extreme exercise, marching for hours, and humiliation made me wonder how he survived. Most of the prisoners did not. His mother and younger sister died in May 1944 and his father in January 1945.

Elie was a devout Jew. As a young boy he was devoted to study of the Talmud. His interest in Jewish law centered his life. He continued to pray and practice Jewish rites even when he was in Auschwitz.

Shortly before being transported to Auschwitz, Jews were told to place clothing and items they wanted to save in backpacks. All of the Jewish families in Elie's hometown, Sighet, Transylvania, left their homes and gathered in ghettos created in the center of town. They stayed in the ghetto until the day the cattle cars came to take them away.

Walking by his home the day he left, Elie commented -

"I looked at my house in which I had spent years seeking my God, fasting to hasten the coming of the Messiah, imagining what my life would be like later. Yet, I felt little sadness. My mind was empty." (page 19)

I was taken by his words "...seeking God, fasting to hasten the coming of the Messiah, imagining what my life would be like later."

Jews do not believe their Messiah has come. They are still waiting.

Reading Night and portions of another book Elie Wiesel wrote, All Rivers Run To The Sea, his devotion to prayer, study of scripture, and Jewish tradition impressed upon me his urgent desire for the coming of the Messiah and for what life would be like when that happened. He persevered with hop that practicing his faith would bring about the Messiah's arrival. 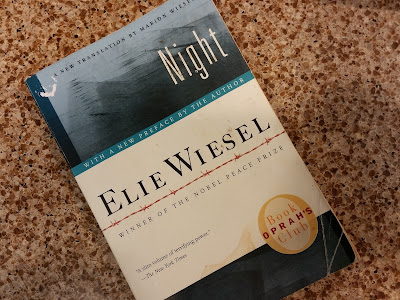 Reflecting on Wiesel's life prior to the Holocaust caused me to think about the purpose of our Christian practice of prayer. When we pray for peace do e have faith that our prayers will result in peace? When we pray for love, do we believe love will come?

I am reminded of a passage in Mark 11:24, where Jesus tells the disciples, "When you pray and ask for something, believe that you have received it." Jesus is saying, if you desire peace, pray using these words - "Thank you God for the peace I feel." You may not feel peace immediately, but praying with a grateful heart will bring comfort until peace comes.

Elie Wiesel believed that fasting would hasten the coming of the Messiah. His heart believed that through fasting the Messiah would appear. He was praying as Jesus directed, "believing that he had already received," a prayer of faith, trust and gratitude.

What do we believe we can hasten through completing prayer, study of God's Word, fasting and acts of love and service? How can we hasten God's kingdom with all people we meet?

Elie Wiesel's faith sustained him through life in two concentration camps. When he was barely alive, beaten to the core, his life with God remained strong --- I think it is because he prayed, believing and God strengthened him to make it through.

Prayer: God, you have given us an example of a young man deep in faith who believed that he could hasten your coming through fasting and devotion to your Word. Let us believe, too, that praying with faith, trust, and belief, we too can hasten your kingdom and mold us more completely into your image. Amen.