Take Time To Write A Letter 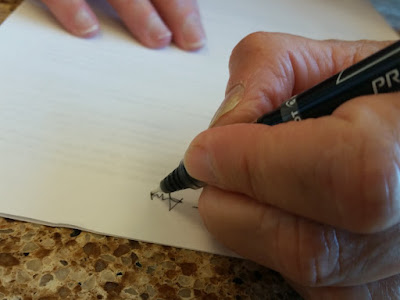 Last month our family celebrated the marriage of our oldest daughter, Sarah, to her fiancé, Ryan. We met several of their friends, including Adam, who introduced them.

As we talked, Adam said, "I really appreciated the letter you wrote me a few years ago when I took Sarah to the airport. I'd never received a letter!"

Never received a letter? Ever?

Astonished, I asked a few questions and discovered that Adam is from Denver, had always lived in Denver, so there really wasn't a reason for anyone in his family to write him. So the only person far enough away to write was a mother in the Midwest, grateful for his kindness toward her daughter who was living in his hometown hundreds of miles away from Indianapolis.

Following our return from the wedding, Adam's comment stuck with me. I made a trip to Barnes and Noble to get a book for a friend having surgery and found Hannah Brencher's book If You Find This Letter. 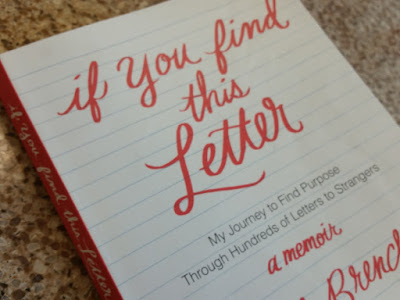 Letters were important to Hannah. She cherished the letters her mother wrote when she was attending college. In fact, when she moved to New York City following graduation for a job, she decorated the walls of her apartment with letters from her mother and friends.

Even after I pack up the letters and took them home, I always wondered what it might be like to give something like that - a bulging package of love letters - to someone I don't even know. To someone who might never get that sort of thing otherwise. Stranger or not we all need the same kind of reminders sometimes. You're worthy. You're golden.


In her search to find meaning, purpose and direction in a large city, she wondered if other people would like to receive a letter as a way to bring love and affirmation to their lives. Riding the subway gave her ample opportunity to observe the cross-section of people living in New York. She focused on those who looked forlorn and lost, an image of how she felt inside as she adjusted to a new job and acclimated to a new home. 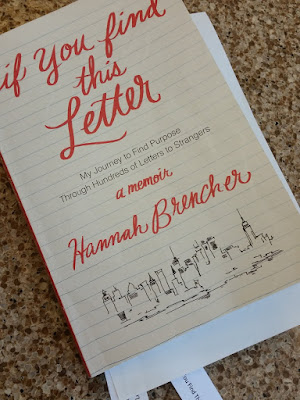 Hannah wrote letters to people she saw, describing her struggles, trying to find her way emotionally, and professionally. She tucked the letter in an envelope and wrote on the outside, "If you find this letter ....... then it's for you." She placed the envelope on subway seats, on bathroom sinks, slipped a few into coat pockets in department stores, in fitting rooms, in the library, all over town.

Over time this act of writing letters to hundreds of people brought her to a place of peace and purpose, and the loneliness that seemed to follow her every step since she arrived disappeared.

I enjoy writing letters too. I can often express thoughts in my heart more deeply when I write. My daughters, who live far away, receive letters from me regularly. While reading Hannah's book, I decided to follow Hannah's example, not only as a writing exercise, but also an activity to expand my heart and deepen compassion toward those stranger I encounter. 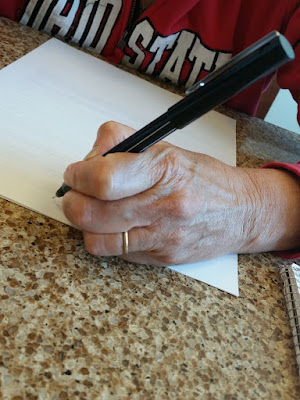 I reminded myself each morning to be alert to someone to whom I could write a letter. I held the image of that person in my heart throughout the day and when I had a moment, I wrote a letter. A few of the people who have "received" my letters include a woman at the post office carrying two large parcels one under each arm, a neighbor who has yellow chairs in the front yard, and a young woman walking into the library with a coffee cup held high and a large book under her arm.

Like Hannah, however, I grew weary of writing letters in a notebook and carrying them in my bag. I decided to duplicate Hannah's method: write a letter, put it in an envelope, and drop the envelope wherever I went. At least someone will receive my words of love and encouragement.

I wrote ten letters with the message below: 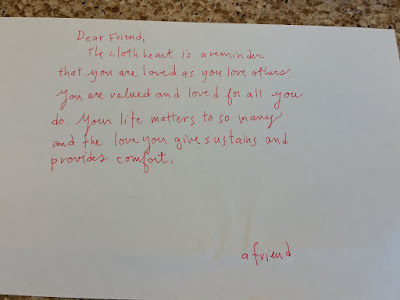 The cloth heart is a reminder that you are loved just the way you are. You are valued and loved for all you do. Your life maters to so many and the love you give sustains and provides comfort.

I folded the letter and tucked inside a heart I cut from fabric scraps. I often include one of these fabric hearts when I send a letter to family or friends. I also included on a separate piece of paper this sentence of explanation; "A letter of encouragement and love to a stranger - based on Hannah Brencher's book, "If You Find This Letter." 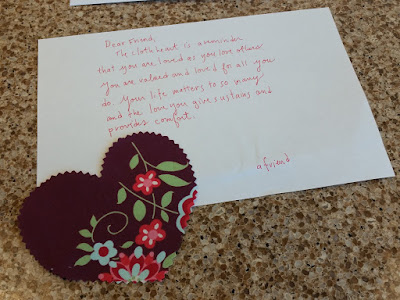 Addressing the envelope according to Hannah's directive - "If you find this letter it is yours," I set off with my bundle.

I've now spent almost two weeks writing a letter to someone I've encountered during the day. The ten letters I wrote have found homes in a restaurant, a confessional booth in a large Catholic church, at a local YMCA, a grocery store, tucked between books in the library, and in the pocket of a jacket in Target

When I place each letter, I offer a prayer that the person who finds it will be blessed and encouraged.

Interestingly, during this two-week period, I have received three letters in the mail, one from a former neighbor, one in the form of a picture from a nine-year-old friend, and a thank you note. 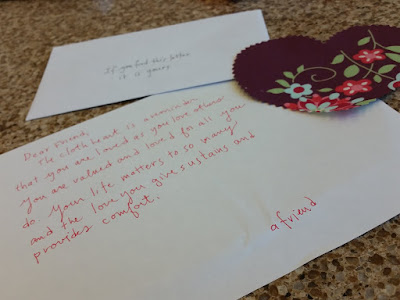 The story of Adam's letter has come full circle. Writing a letter of gratitude left an imprint on his heart. His comment awakened me to Hannah's book reinforcing the importance of the lost art of letter writing. Next time I talk to Sarah, I plan to tell her about the time I spent with Adam and how his gratitude encouraged me to keep writing.

Reflection Question: Who among your circle of family, friends and acquaintances would benefit from a handwritten note? Take a moment, put your thoughts on paper, and mail an envelope of compassion and care.

Prayer: God, you give us the example of Paul, who wrote letters to people in the churches he established. He offered encouragement, guidance, wisdom, and blessing to each since he was unable to regularly visit. Let us model our ways of expression to others following Paul so we can have a record of thoughts and feelings toward others they can reference forever. Putting our hearts on paper leaves a cherished legacy to the recipient. Amen. 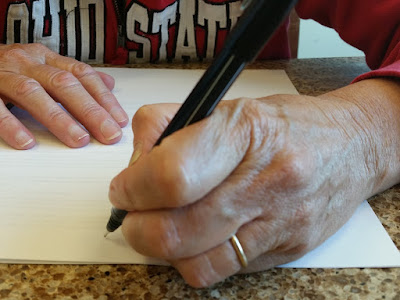 I married Mike, a retired United Methodist pastor, on August 10, 1974. We have two daughters: Sarah, an art teacher in Denver, and Anna a marketing and social media strategist in Portland, Oregon. I was a speech pathologist for 36 years and tutored students in a variety of subjects, but I’ve retired from that work and now I’m a spiritual director, writer, artist, and retreat leader. I write regularly for SpouseConnect, a website geared toward clergy spouses, and have written for
The Indianapolis Star newspaper.