Pause in the Movie "Brooklyn: and during Lent 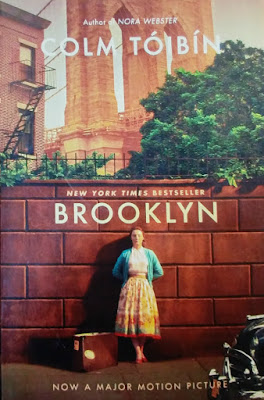 Pause - a temporary stop or rest, especially in speech or action; a cessation of activity because of doubt or uncertainty; a momentary hesitation.

The Saturday before Christmas I tunneled through frenzied shoppers at the mall to reach a place of quiet in a second floor movie theater. My youngest daughter, Anna, saw the movie "Brooklyn" in mid-November and thought I would enjoy it. Since I was spending a few days with Anna at the end of the week, I wanted to make sure I saw the movie before our reunion.

My special friend, Emily, who is almost twenty, joined me. After the movie, I appreciated her observations that gave me a youthful perspective on the plot.

"Brooklyn" is a story about a young, Irish woman, Eilis, who ventures to New York City to start a new life. She lives in a boarding house, finds a job in a department store, and quickly meets a charming young man. Although her early months go smoothly, she misses her mother and sister.

Throughout the movie, I was captured by pauses that occurred. "Brooklyn" isn't a fast-paced movie; the plot evolves slowly and deliberately.

The pauses occurred in many spots more than I can remember in most movies. When her boyfriend tells Eilis he loves her, she pauses, looks at him, puts her face down and walks away. The audience was held in suspense wondering what she would say to an expression of love early in their relationship. Her pause and non-verbal reply seemed appropriate.

Whenever Eilis receives letters from home, she holds them in her hand before opening. Her pause reflects her anticipation and excitement for the greetings from her mother and sister.

One day Eilis sees the priest of the church she attends in the doorway of the department store where she works. She pauses in the middle of a sale and watches him move slowly toward the counter. She reacts but needed to complete the sale. He moves slowly to the counter as her customer leaves. The priest pauses, trying to find words to deliver the news of her sister's unexpected death.

Pauses in the movie, "Brooklyn," illustrate the value of taking time to reflect before responding or experiencing the gift of a letter communicating the unknown, but treasured contents, and wondering about the visit of a priest conveying sad news.

How Did Jesus Pause?

In John, chapter 8 verses 1-11, Jesus was confronted by the teachers of the Law and the Pharisees when they brought a woman to him who had committed adultery.

"Teacher," they said to Jesus, "this woman was caught in the very act of committing adultery. In our Law Moses commanded that such a woman must be stoned to death. Now, what can you say?" They said this to trap Jesus, so that they could accuse him.

Now this question carried great meaning and importance, as Jesus was being "put to the test" so to speak by the well-respected people in authority. Jesus, however, took a moment to pause before answering. He bent over and wrote in the ground - or as some described the dust that covered the land. His pause caused the Pharisees to pause too, which might have increased their distress over not receiving an immediate answer.

Jesus finally replies, "Whichever one of you has committed no sin may throw the first stone at her."

After Jesus answered the questions, he paused again, bent over a second time to write on the ground.

The Pharisees and teachers did not receive the answer they expected, so they went away.

Jesus demonstrated that pausing to reflect before answering questions is an important part of communication.

Can We Pause Today?

Pauses in our age seem few and far between. We push the pause button when we watch a movie to get more food or use the bathroom, then resume our feature. Often our answers to questions are "rapid-fire" so we can move on to other topics. The art of pausing to reflect on an answer before speaking can give us time to collect our thoughts, to organize our words so we can say what we want to convey.

Pauses in conversation are often seen as "awkward silences," but this awkwardness can give those engaging in conversation valuable time to reflect on what has been said, plan words and put together sentences that are most helpful.

A Way to Pause During Lent

I recently found a book that I plan to use during Lent called Pauses for Lent - 40 Words for 40 Days. The author, Trevor Hudson, invites the reader "to make a commitment to pause during each day of Lent, to read each brief meditation, and reflect on the word for the day. This art of pausing carves out space in your hectic life to listen to God."

I am looking forward to reading this small book and developing the habit of pausing more frequently with each word offered.

Emily and I left the movie theater chatting animatedly about our impressions. We were touched by the poignant scenes when Eilis says good-bye to her mother and sister before leaving Ireland. Emily focused on Eilis' character development throughout the movie, while I mentioned the pauses. The pauses framed tender moments in the movie making each one stand out in importance.

Later that evening I remembered how Jesus paused twice before responding to the Pharisees. I look forward to practicing pausing during Lent. I pray this act will open my heart to a deeper way to receive God's Word.

Prayer: Pausing seems counter-cultural, God, in our busy world where we are so connected with others, but must be intentional to stay connected with you. Guide our moments to include pauses where we can stop and reflect, for in these pauses we can seek you for words or insight or as a way to dwell deeper in you. Amen.

I married Mike, a retired United Methodist pastor, on August 10, 1974. We have two daughters: Sarah, an art teacher in Denver, and Anna a marketing and social media strategist in Portland, Oregon. I was a speech pathologist for 36 years and tutored students in a variety of subjects, but I’ve retired from that work and now I’m a spiritual director, writer, artist, and retreat leader. I write regularly for SpouseConnect, a website geared toward clergy spouses, and have written for
The Indianapolis Star newspaper.